A lot of our customers ask us to recommend the 'best' sandpaper to use. Below is an explanation that may help you decide.

Open Coat vs. Closed Coat
The coat reference to where the bonder that adheres the grit to the belt provides gaps between the grits (which means it's an 'open' coating), or doesn't (closed coat).

Once you choose open or closed type sandpaper, now you need to choose the 'type' of abrasive. There are four main types of sandpaper abrasives used in woodworking; Aluminum Oxide, Garnet, Silicon Carbide (also call Zerconium), and Ceramic. The two used most often by woodworkers are Aluminum Oxide and Garnet.

is the most popular because it's 'friable'. Friabilitymeans that when heat and pressure are applied each grit will fragment a small amount. This creates new sharp edges, thus renewing the cutting action to enable the aluminum Oxide to last longer.

is also used in woodworking. It is not friable like Aluminum Oxide, so the edges of the grit dull during use. So, you may feel lots of grit on your belt, but its ability to cut is diminished. The good news is garnet sandpager produces a smoother surface than aluminum oxide for the same grit number (due to the 'wear' of the grit's edges). Garnet is often used as an a final sanding paper (120 grit or higher) because it tends to burnish, or seal off a wood’s grain. resulting in a 'smoother' finish when applying thick coatings like paint or varnish.

Silicon Carbide (also called Zerconium) is harder than both Aluminum Oxide and Garnet. This makes it suitable for cutting hard materials like metal, paint, plastic, and fiberglass. Silicon carbide is also a friable abrasive. But keep in mind that wood is not hard enough to fracture silicon carbide's surface, so it'll appear to wear out faster than Aluminum Oxide. The trick, then, is to refresh the belt by sanding some angle-iron, or even a cinder block for 3 seconds. Then you can go back to your wood sanding.

is not a friable material. It is the hardest of all of the abrasives commonly available, and it tends to be the most expensive.  For this reason, only commercial shops uses them for shaping or leveling table tops, etc. 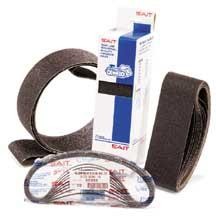